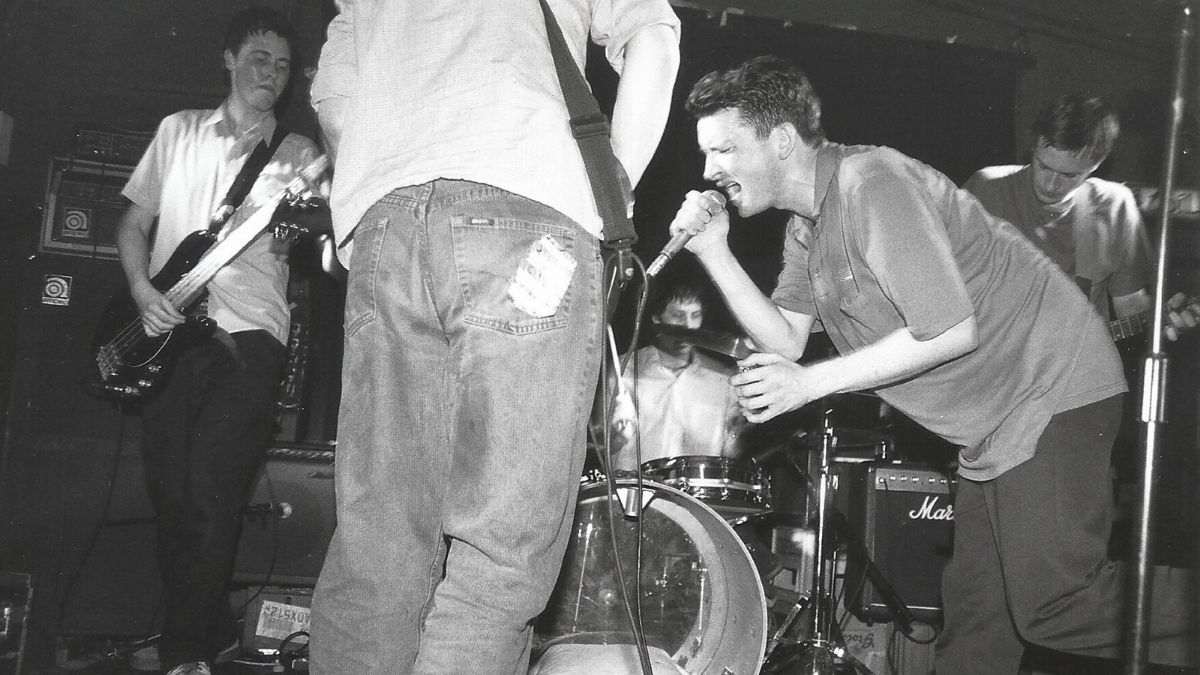 During 1993, before the musical genre that would become known as “emo” had started to trickle through to the UK’s fledgling hardcore scene, a little-known band from Nottingham, England called bob tilton (named after an American evangelist television star) recorded a 7 inch EP for Subjugation that would come to define the label’s identity and distinction.

The untitled EP was released in early 1994, and helped by a limited pressing of 1000 copies and rumours spreading fast of the bands incredible live show, it sold out almost immediately and was later re-pressed. Nottingham had, to date, given two legends to the world in the shape of Robin Hood (who was fictional) and Brian Clough (who was from Middlesbrough), could bob tilton be the real deal?

As word spread bob tilton found themselves within the by then burgeoning “emo” scene, but the connection was as uncontrived as the definition was inadequate. From that point on there would be no holding back, and with the release of the Songs Of Penknife And Pocketwatch 7 inch EP early the following year, the word spread beyond the tiny overprotective scene from which it was born. When the band and Subjugation label refused to give in to the repeated requests for review promos, the NME went out and (gasp!) paid for a copy. The resulting Single Of The Week review disappointed many people who had previously shown interest in the band, as it was interpreted at the time as though promos had been thrown around and suggested a compromise of intent.

Release wise, all was quiet for the next two years while the second EP continued to be pressed and shipped out. The band were invited to record a radio session for the prestigious John Peel show on BBC Radio One, and they did just that in 1996. By segueing two older songs, they managed to record five songs instead of the usual four. This session later ranked very highly in the annual Festive 50, when listeners of the show vote for their favourite sessions and records of the year. The long-awaited new material was sounding better than anything before, even in a live capacity, as the band refused to resort to formula and continued to stretch.

A few months later Subjugation proudly released the debut LP and they could finally fill the back orders. An already established, as well as a growing audience were wooed by the carefully hand screened covers and lyric booklet, until at last the needle locked into the groove. Recorded on little more than a tape recorder (referred to affectionately as the electric press) by bass player Mark Simms at various sites, we all new that it would be a long wait before we had anything after these nine songs, if ever, and that made each one especially precious.

Crescent sounded great – certainly a contender for the best album to come out of the UK that year. In the build up to Crescent, Subjugation had also released the best works by a few of their other bands that were also making an impression at that time, including Tribute (who shared a member with bob tilton – Chay Lawrence) – these bands helped keep the interest in this new sound alive. 1996 was a great year for the British underground music scene, and Crescent was up there with the best. It’s influence can be felt from acts ranging from Spy Versus Spy to Mogwai.

Over the next three years bob tilton would play fewer live shows than ever before (due to living in various parts of the country) and another record seemed a long way off.

In December 1998 bob tilton found themselves in discussion with Southern over the release of their almost completed second album The Leading Hotels Of The World, a new label (Sousaphon Recordings), and band (I am Spartacus) which involved some of the band. Shortly afterwards the deal was signed. bob tilton refused to be hurried into finishing the recording and artwork. Never willing to outstay their welcome, the completion of The Leading Hotels Of The World found them feeling that they had taken it as far as they could, and with drummer Allan Gainey planning to relocate to London they decided to call it a day in the spring of 1999, and move on to other things.